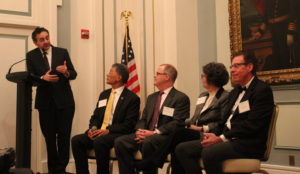 An invited screening of Five Minutes, an animated short film produced by DFP faculty about regenerative medicine and war, was hosted by The Wake Forest University Graduate School of Arts and Sciences, The Wake Forest Institute for Regenerative Medicine, The Documentary Film Program and the Wake Washington Center at the Army and Navy Club in Washington, DC on Wednesday, February 26.