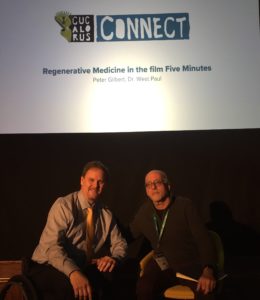 Professor of Practice and co-director of the animated narrative film Five Minutes, Peter Gilbert teamed up with Dr. Paul West for a Cucalorus Connect screening of the film and a conversation on its focus on regenerative medicine.  The film explores the hope of regenerative medicine (RM) for U.S. soldiers through the story of one soldier’s devastating injury and his dreams for recovery.  RM promises a future where doctors, using a soldier’s own cells, rebuild genitalia and reconstruct arms and legs blown apart by shrapnel. The short film was directed, produced and edited by Wake Forest University faculty members Sandy Dickson, Peter Gilbert, Michael Hyde, Chris Zaluski and Cara Pilson and illustrated by award-winning artist Cory Godbey.

Cucalorus Connect, part of the Cucalorus Festival, explores the intersection between creativity, technology, and humanity. The two-day gathering brings people together to discuss what kind of future we could build if we use innovation and technology to expand our sense of humanity. This year’s conference features leading thinkers on health, finance, startups, coastal resilience, racial justice, and so much more.