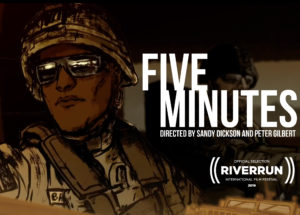 Five Minutes, an animated hybrid film about war and regenerative medicine, directed by DFP faculty members Sandy Dickson and Peter Gilbert, and co-directed by Chris Zaluski, is an official selection of RiverRun.

Through the eyes of a young soldier from southwest Louisiana, the filmmakers and animation team tell a story of one glimmer of hope in the seeming inevitability and cruel capriciousness of war.  Baptiste Touissant’s dreams of opening a Cajun restaurant ended when a suicide bomber detonated only feet from him.  Five Minutes a story about Baptiste’s recovery and the hope of regenerative medicine (RM) for U.S. soldiers.