DFP alumna Monica Berra (MFA ’16) co-directed, produced, and edited, Black Colleges in the Age of Trump, released this week by The New York Times Op-Docs. Berra co-directed the Op-Doc with critically acclaimed filmmaker Stanley Nelson. Nelson is an Emmy and Peabody award-winning director and producer, a MacArthur “Genius” Fellow, and a recipient of a Lifetime Achievement Award from the International Documentary Association. 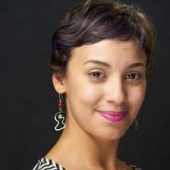 “I’m thrilled to share this short documentary which takes a look at the treatment of our nation’s historically black colleges and universities (HBCUs) by the Trump administration. It was a true honor to make this film with director Stanley Nelson.”

The Op-Doc is adapted from Nelson’s latest feature documentary Tell Them We Are Rising: The Story of Black Colleges and Universities, will premiere on the PBS series Independent Lens on Feb. 19th 2018 at 9pm ET. Berra is the Impact and Engagement Coordinator for the film. You can learn more about the film and its outreach events at Tell Them We Are Rising #HBCUrising.