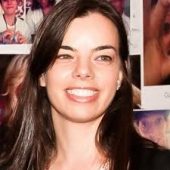 Emmy-nominated producer and editor Inbal Lessner stopped by the DFP this week to share her producing and editing expertise with the students. Lessner, who is serving as a visiting instructor at UNCSA this fall, has worked in non-scripted television, documentary series, documentary feature and narrative films. She produced and edited Brave Miss World, which premiered at AFI Docs and was launched as a Netflix exclusive in 2014. The film received an Emmy nomination for Exceptional Merit in Documentary Filmmaking. Lessner spoke to the students about her career path and offered a workshop on archival editing.