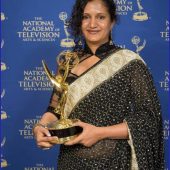 Award-winning director and editor Hemal Trivedi will visit the DFP on October 10-11. During her two-day visit, Trivedi will share her storytelling expertise and editing techniques with the DFP students and provide advice and feedback on thesis film projects.

Trivedi’s work as a filmmaker and editor has been recognized with one Oscar and three Emmy wins and seven Emmy nominations.   Her work has been showcased in major film festivals including Sundance, Tribeca, and IDFA and broadcast on Netflix, HBO, and PBS (Frontline and Independent Lens). Trivedi’s critically acclaimed film Among the Believers, which premiered at the Tribeca film festival, was ranked as one of the top documentaries of 2015.   Among the Believers screened in over 50 film festivals in 25 countries and won 12 awards including an Independent Spirit Award nomination.

The DPF will host a screening of Among the Believers on Tuesday at 6 p.m. at The Graduate School @ Brookstown, 200 Brookstown Avenue, Suite 302B.